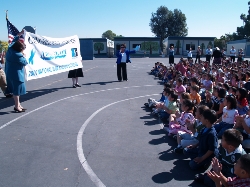 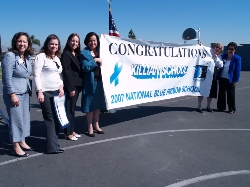 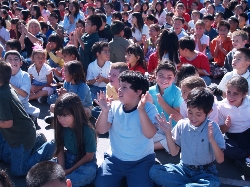 (Highlander 11/01/2007)
Local schools win Blue Ribbon
(By Richard Irwin, Staff Writer)
Blandford Elementary certainly isn't bland. And any parent would kill to have their child go to Killian School.
Maybe that's why the two Rowland Heights schools were recently named Blue Ribbon Schools by the U.S. Department of Education.
Think Oscars for school districts, or Emmys for principals. The coveted award is given out to only 300 schools across the nation.
The prestigious award honors schools for helping their students achieve at very high levels. Others were selected for making great progress in closing the achievement gap.
"These schools are proving that when we raise the bar our children will rise to the challenge," said Margaret Spellings, the U.S. Secretary of Education.
"It takes a lot of hard work by teachers and students to become a Blue Ribbon school, and it's a privilege to celebrate their great efforts," the country's top educator noted.
The secretary's regional representative Tori Hatada visited Killian on Oct. 9 to tell them the news.
"We are on cloud nine! All of us are overjoyed to be recognized in this way. It acknowledges the hard work that our staff, students and parents so faithfully do," Principal Susan Halliday said.
The feisty principal embodies the spirit that permeates the local school, where learning is fun and values such as respect and responsibility really count.
The school's progress has been recorded over the years with many awards: a Golden Bell in 2005, California Distinguished School for the second time in 2006, and a Title I Academic Achievement Award in 2007.
Now the Rowland Heights school has added a large banner proclaiming it a Blue Ribbon School. But banners and plaques are merely objects representing the hard work and dedication of students, staff and parents working together.
And it hasn't always been easy: 45 percent of the 660 students come from economically disadvantaged families. Another 41 percent are English learners and 12 percent have disabilities.
"We have made significant progress on our test scores every year. This continuous improvement has brought our score up to 868 on the California Standards Test," Halliday said.
But all work and no play makes for dull students, so Killian offers a wide range of extra-curricular activities. Chorus, band, jazz band, violins, intramural sports, Mad Science Club, chess club, drama club and Young Rembrandt Art classes.

Fifty-one percent of the students are of Asian descent. The local campus is home to an American Chinese school in the afternoons and Saturdays. The school provides instruction in Mandarin, as well as homework assistance and English language development.

The majority of the 671 students at are English language learners. Principal Jo Ann Lawrence noted that 17 different home languages are represented. About 18 percent of the students speak English only.

And yet, student achievement in acquiring English proficiency is one of the highest in Rowland Unified. In fact, student performance on state writing and science tests show that fourth- and fifth-grade students scored among the highest in .

The Rowland school received the Blue Ribbon for being in the top 10 percent of schools in the country.

The index measures the academic performance and growth of schools on a variety of academic subjects.

"I think the MIND program has made a big difference in our scores," said.

The principal explained that second- through fourth-graders use the MIND Institute Math and Music Program. Developed at UC Irvine, this program offers instruction on piano keyboards and individualized computer math.

"The first year we tried it in the second grade, the students' proficiency levels went from 72 percent to 90 percent," recalled.

Utilizing the so-called Mozart effect, the music-math program actually enhances the development of neurons in the brain, according to the local administrator.

The school has also gone to single-subject teaching in the fourth-, fifth- and sixth-grades. Teachers specialize in one subject, with the students rotating through their classrooms every day.

"If a teacher really loves math, he may be a terrific math teacher, but a weaker social studies instructor," said. "Now the teachers can concentrate on one subject."

The Blandford staff has also created the "Make It Happen" program for students having difficulty. The teachers volunteer at lunch and after school to mentor students on a one-to-one basis.

These children are also invited to join the After School Adventure Club, which offers fun activities such as gardening, yoga and games.

"We just want them to have fun, to feel good about themselves and build their self-esteem," said.

Parent involvement also plays a big role in Blandford's success. Parents have volunteered more than 10,000 hours at the school.

"Our parents are extremely supportive. I'll often go to a home for a discussion about education and our school," said.

Blue Ribbons indicate the cream of the crop, the best of the best. And Killian and Blandford schools deserve the national recognition they've earned.