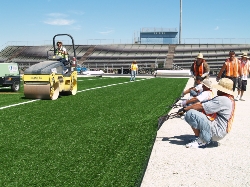 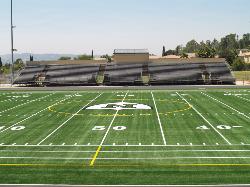 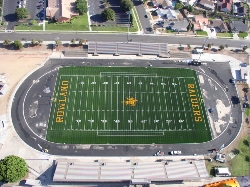 You could call them fields of dreams because the local football teams have been dreaming about them for so long.

Their dreams are coming true as the new football fields near completion at and Rowland high schools. The has poured $4 million into the new fields this summer, one of the first big projects completed from bond money.

"The Board of Education made the decision about the fields early in the process of setting priorities for Measure R 2006 to improve safety for our student athletes," explained Superintendent Maria Ott. "The artificial turf enhances our facilities for all sports and for band and field shows. Our community is proud of the new fields, and we continue to thank everyone for their support."

Bruce Alley, athletic director at in , said, "The new field is beautiful. I walked out there the other day and thought 'This could be the most beautiful football field I've ever seen.'"

Alley said this was the first major work done on the football field since he began teaching at more than 20 years ago.

"The team is really excited about playing on the new field, but we have to wait for the cooling system to be finished," Alley said.

The district is waiting for pumps that circulate cooling water underneath the artificial grass. The athletic director hopes the lower division teams can take the field on Friday, Sept. 7, while the varsity football team gets its chance on Sept. 14.

To paraphrase an old expression, the grass really is greener on an artificial surface. The bright, green grass looks spotless, with immaculate white striping embedded along the yard lines.

is spelled out in huge letters in the end zone, while the Nobles logo is featured in the center of the field.

School board members visited the new fields on Aug. 24, the first day of school for the district.

"It is an exciting time at Rowland Unified. Modernization efforts are under way and the community can see it firsthand as demonstrated by the beautiful new fields we have at each of our comprehensive high schools," said , school board member.

Board member Gilbert Garcia added, "We were compelled to repair and replace our infrastructure with that first bond, and we're still not finished. Our new fields represent some of the visible improvements that this great community has made possible with the approval of our second bond, Measure R, 2007."

The director said the new field should cut back on injuries for the athletic teams. The level new fields should allow a surer footing for the high school athletes.

"I heard you might get some brush burns from sliding on the field turf, but that's minor," Alley said.

He thinks the new fields should attract more students to try out for school athletics. And star players won't want to transfer to other schools for better athletic facilities.

"This will give our kids more pride in their school," Alley noted.

Nearby was just finishing the installation of the long green carpets. School officials said unexpected problems had required more work than anticipated.

"We're really excited. This should certainly enhance our athletic programs. We'll have the football and soccer teams playing here, as well as the PT classes," said Athletic Director Ralph Harris.

"Our kids have been chomping at the bit to use the new field. Yesterday, the soccer team climbed up into the bleachers just to look at the field," Harris said.

The director said this was the most work done on the football field since he came to Rowland in 1979.

Harris said he could see the contractor installing the rubber bits that hold up the blades of grass from his office window.

"This is the closest simulation to real grass that I've ever seen. They've really improved the artificial turf," the athletic official said.

Harris hopes the varsity football team can play on the new field on Sept. 14.

"This will make our field very consistent. There won't be bumps and dips in our field like there used to be," the athletic director said.

Better yet, he said the fields should last 10 years with proper maintenance.

Which should make them fields of dreams for several more generations of athletics at Rowland Unified.